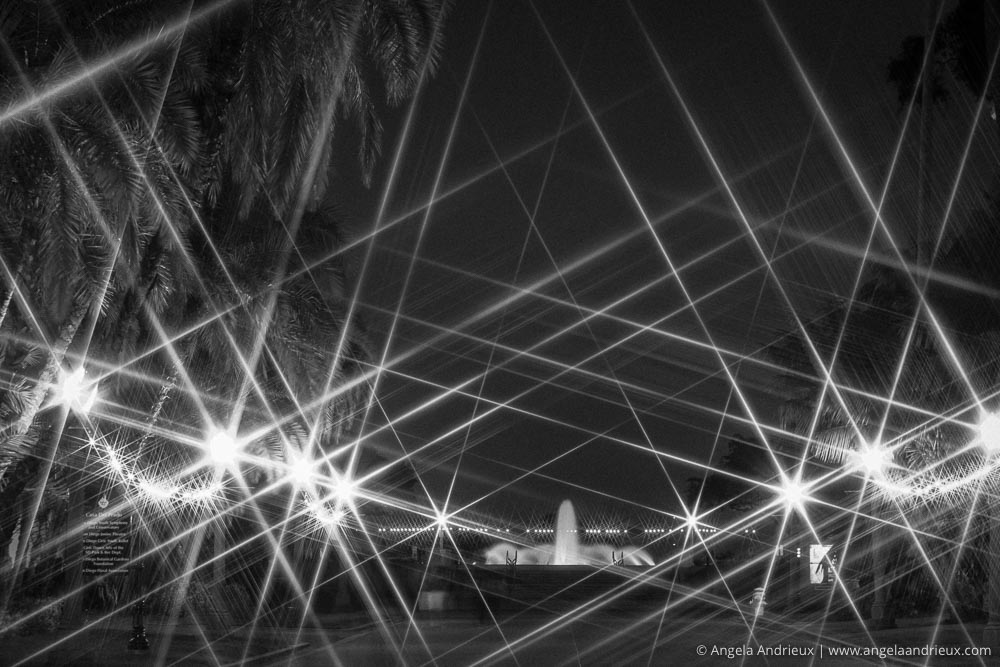 The offer in this post has expired, but you can use coupon code “angandrieux” to get 15% off all Topaz Labs software anytime!

Its been a week since my dad’s accident and this is the first chance I’ve had to sit down and get some work done.  I’m happy to report that his recovery is on track, though it’ll be a while before life returns to anything resembling normal. For now, I’m at my parents’ home in San Luis Obispo, CA helping out where I can. I seriously doubt I’ll be back in San Diego until after Christmas.  For the time being, I’ll sneak in pockets of “work” when I can.

Today I got my hands on a copy of Topaz Star Effects.  I’ve been eyeing this software for awhile, but haven’t put my money down for it…yet.

Up until today, if I wanted a starburst light effect in one of my photos I had two options:

Both of these methods have their pros and cons, but what I like about both is the authentic, organic experience of “you get what you get”. Once you have created a star its next to impossible to get rid of it…but that can also be a challenge.

The reason I’d been hesitating about buying this plug-in was that many of the photos where I’d seen it in use looked fake. Occasionally cool, but mostly a bit overdone (in my humble opinion). Today I watched part of a YouTube video on the software and then dove in to explore on my own.

I have to say, I think I’m sold! I really like what Topaz Star Effects can do – its very flexible on how much or how little you use the effect, with many controls to get the look you desire. There are also several types of stars available, some more realistic and natural than others.

What I REALLY like about this software is the ability to place stars on any light source in an image, and also to remove them! This was my greatest frustration with a star filter. Sometimes the star effect catching every single light is just too much…and once they are there its quite difficult (and sometimes impossible) to remove. The photo below is one example of this issue:

I’ve put together a few before-after sequences to show how I used Topaz Star Effects today. I’m pretty impressed! I tried to make the photos have a bit more impact without being BAM!! LET THERE BE STARS!! Have a look and let me know what you think: 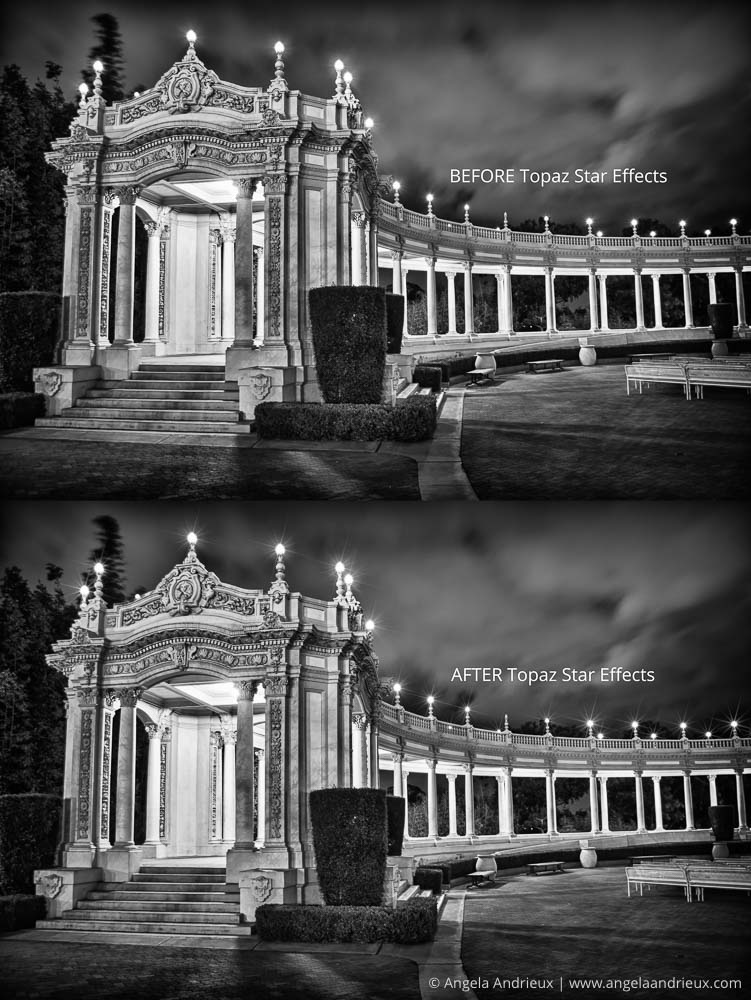 As you can see, I added a few delicate stars along the top of the pavilion. The original had a few slight starbursts made by the lens, but Topaz Star Effects added definition to the existing stars plus a few more. 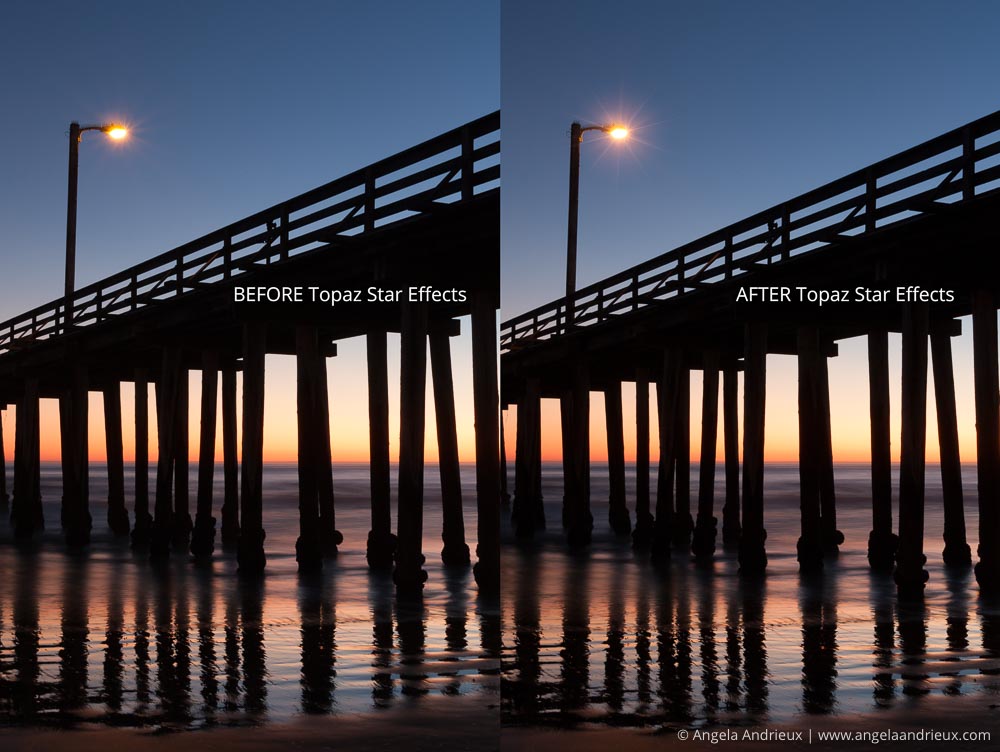 Again, this one already had a bit of a starburst straight out of the camera, all I did was make it a bit bigger and more defined with Topaz Star Effects. 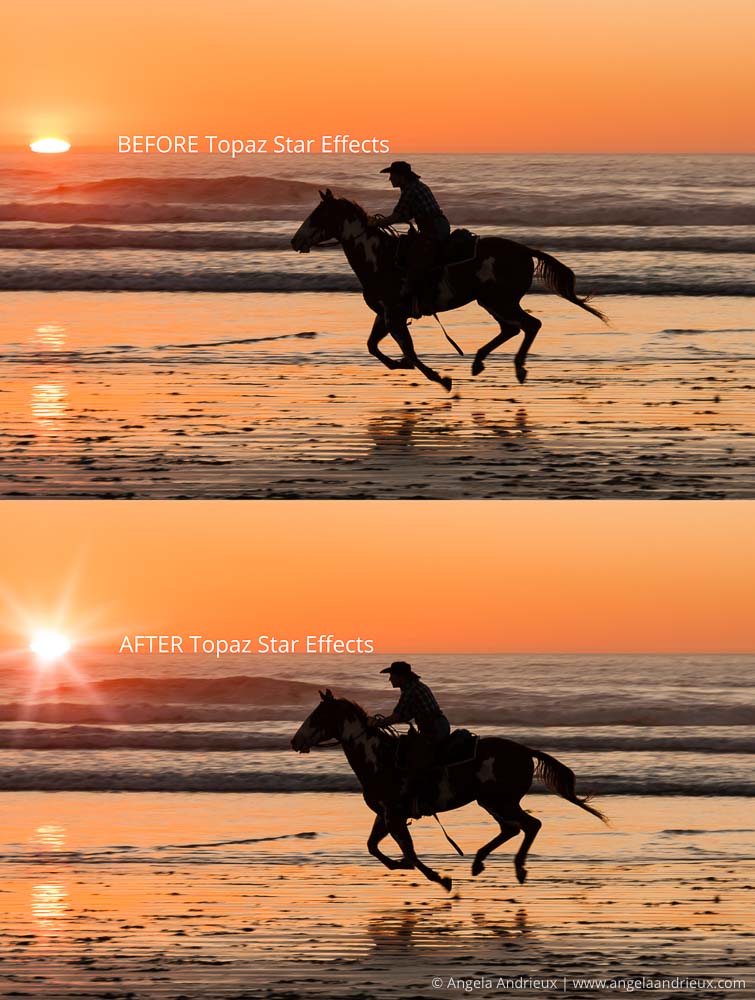 In this one I took the setting sun, where I had used a large aperture (not conducive to creating a starburst with the lens) and added one entirely in post-processing using Topaz Star Effects. I think the effect is quite convincing! The colors in the rays of sun toward the bottom blend in beautifully with the natural light in the photograph.

Now, here is the really good news: Topaz Star Effects in on sale through December 31, 2013! Just use coupon code “decstar” to get it 50% off, making it just $14.99 – a stellar deal for this helpful piece of software.

Disclosure: I received this product for free in exchange for an honest and unbiased review. This post also contains affiliate links which means that I may receive a commission if you click on one of the product links and make a purchase. I only share products that I believe will be valuable to my readers. All opinions are my own.